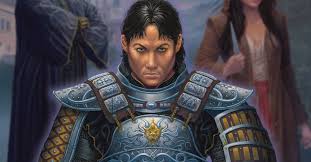 Review: Son of the Black Sword

Nope, this isn’t a quote from the book, but it describes both the main character and the author. 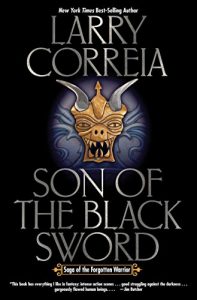 I know I’m five years late to reading this book, but I finally got around to reading and reviewing it.

Larry Correia is very quickly becoming one of the most prolific authors of the 21st century and because of that, he’s become a master of the craft. I think he cranked out around quality novels in the time it takes for George RR Martin

Son of the Black Sword is a cool blend of all sorts of Asian cultures (including Indian and Middle Eastern) in what I call a “light fantasy” setting. There’s no dragons, no elves, but there are evil demons who live in the sea that come out to torment villagers. There’s also the brief appearance of some automatons.

The world is protected by a mystic order of Protectors (the name is really cringy the first few times you read it, but you get over it) who are kinda like a cross between Witchers and Judge Dredd.  The Witcher comparison is obvious in the first few pages: They’re still human, but their senses, strength, and vitality are augmented by a magic sounce known as “The Heart of the Mountain.” They also kill monsters for as part of their job. The rest of their vocation is enforcing the law… Down. To. The. Letter. The law is everything to these guys.

Our protagonist is a Protector named Ashok Vadal and he’s got a leg up on the other protectors by wielding a black sword named Angruvadal the Ancestor Blade. Very few houses will pledge Ancestor Blade holders to the Protectors for fear of losing the blade on the many dangerous missions they go on.

This sword ROCKS. By appearance, think a medieval version of the Darksaber from Star Wars. By behavior, think of Thor’s Hammer, but instead of the unworthy being unable to pick it up, the sword possesses you and forces you to commit suicide. Maybe if you’re lucky, it’ll only hurt you really badly. It also gives the user the buff of having the combat instincts of ALL prior users. While it’s really cool to see Ashok wreck shop with this weapon, Correia puts him in plenty of situations where he’s not able to use it, usually for honorable reasons.

So what did I mean by my phrase at the beginning of the review? Well it’s obvious without spoiling the story that Ashok, being at the top of his game, will be forced into situations where he’s going to make some very tough decisions which involve breaking his oaths.  But what about author Larry Correia?

This book breaks a lot of rules that would get a first-time manuscript thrown in an agent’s trash. We start with almost, but not quite a “Running From the Bear” opener where Ashok wakes from a dream and then he’s off to battle with little preamble.  It retains the issue of the reader having little reason to care for the main character, but he’s so overpowered, you’re not going to be worried about him anyway. Instead, we’re given some really cool morsels about the world as Ashok is stalking a monster through a “casteless” village.

Casteless are humans who are not legally people. They’re not even good enough in the eyes of the citizens to be used as slaves in many cases. It’s even illegal for them to pick up a weapon in self-defense. All you can do is comply and die. (Kinda like if you’re a citizen of Britain today. Sorry folks, no Second Amendment for you).

The book also has multiple POVs and flashbacks. As bad as this usually is in other books, these ones work. Every time there is a switch, it’s something that makes sense. The prior chapter poses a question and a flashback answers it. The plot has a lot of political intrigue and swashbuckling fun, but it’s simple enough to be jumping around. The cast of characters is tight and there’s no fat on this story. This story would EASILY translate to a motion picture (and I hope it does).

Since Larry is a well established author, there wasn’t any problem with ending the book on a cliffhanger and the sequel is already available.

Minor spoiler alert: There’s even a hint that a future sequel maybe, just maybe jump the universe into science fiction. There’s some strong clues at some ancient alien stuff and I hope to all hell that the promise is fulfilled.

Let’s move onto the talking about the cover design. For a mainstream published fantasy novel, the cover is surprisingly simple. It’s a throwback to a lot of Raymond Feist’s stuff. If you do like your fantasy cover art being of “picture of protagonist looking like a badass” nature, then just inside is a glossy page with what I would presume to be alternate cover artwork.