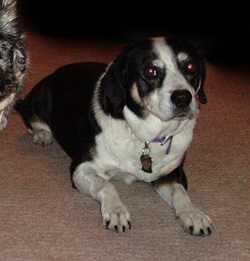 Have you ever watched or read “A Dog’s Purpose”? It’s such a sad, yet heartwarming movie. You KNOW the dog’s spirit is immortal and will keep coming back, but every time he dies, it’s still tragic, because you’re feeling the loss of the owner. It sucks losing a dog.

For those who read my entry about Leo, I talked about the recent heartbreaking loss of him. Here, I’ll talk about a more distant loss in the past.

At the age of eight, in 1993, my dad surprised my sister and I after school by bringing home a puppy. The town of Overton’s construction had been booming in the 90s, so my dad was always there with his team. One of his customers had a litter of puppies and he adopted one for us. She was a black and white hound dog and breed-wise, seemed to be between a beagle and foxhound. My sister named her Belle. She got to name every pet we had growing up.

Belle because Disney’s “Beauty and the Beast” was big. Years later it was Buffy the hamster and Charisma the blue healer/terrier mix because “Buffy the Vampire Slayer” and Charisma Carpenter, one of the actresses on it were big.

Belle was quite the hellion. She drank vehicle fluids and needed to have her stomach pumped. She would jump onto the wall and walk it like a cat until she saw something interesting to go after. My elementary PE teacher who lived adjacent to us caught her doing that one. She jumped into another neighbor’s yard and killed their pet chickens. A wild rabbit wandered into our yard and she killed it with extreme prejudice. I attempted to get the body from her, but she’d run to the other side of the yard everytime I got close (we had an acre of land). She’d gnaw on it until she had eaten all of it. ALL of it. Bones, skin, fur, EVERYTHING. On one of her excursions, she got into a neighbor’s trash. There, she ate something greasy that gave her pancreatitis which required a special diet for the remainder of her life.

My dad had to raise our backyard cinderblock walls by a foot because she could jump so high. She still cleared the wall after that addition. He ended up putting up chicken wire to finally block her from jumping the walls. That safeguard remained until she developed arthritis and could not jump anymore.

Once that kicked in, her remaining years were less eventful. Seeing her age was much more tragic than actually losing her. She became weaker and had a hard time standing up. She became incontinent and needed frequent bathroom breaks. She lost her hearing and my mom needed to flash the porch lights at night to let her know to come in (that actually worked very well). My parents struggled with the idea of euthanizing her, but couldn’t go through with it. I don’t blame them. I’ve been there and had gone through with it years later, and I don’t wish that decision on anyone.

She must have lost her sight as well because she eventually wandered into the pool and drowned in 2010. I was sad about it, but she had a good run of seventeen years and no longer suffered. It didn’t nearly bother me as much as it did with losing Leo. He was only six, if even that. Little did I know that the spunkiness of this dog would return to me seven years later.